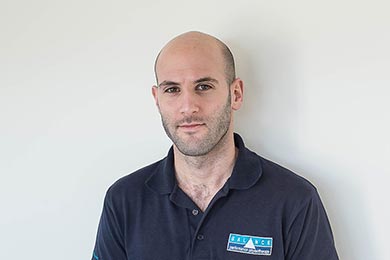 Dan developed his passion and interest for physiotherapy competing as a county level decathlete. Initially Dan completed his BSc undergraduate degree in Sport & Exercise Science from the University of Hertfordshire.  This then led onto a BSc in Physiotherapy from the prestigious St Georges Medical School and an MSc in Sports Rehabilitation from Salford University under the tutelage of Olympics Games Physiotherapists.

Dan is now 14 years qualified and has worked across a range of sectors including a senior musculoskeletal clinician in the NHS and within private practice treating both amateur and elite level athletes.  Dan has now worked as a Physiotherapist for the England Athletics team for the last 7 years travelling nationally and internationally.  Dan has also provided Physiotherapy support to runners at multiple London Marathons and has treated sprinters, endurance, and ultra-marathon athletes for years.   Daniel is also an associate lecturer for The University of West England on the Sports Rehabilitation BSc, with a specialist area on sporting injury and return to play.

Dan brings a specialist interest in treating and rehabilitating youth athletes to Balance Performance Physiotherapy.  This passion has led Dan to create and host his own podcast titled Believe Move Grow where he interviews experts and sport personalities in the area of youth physical and mental well-being. Dan brings all this knowledge to the clinic to optimise a youth athletes’ enjoyment of their chosen sport or physical activity.

Daniel believes in treatment and rehabilitation that fosters the achievement of maximum performance potential, self-control over one’s health and the ability to thrive and enjoy your pursuits at any age.

Dan is a keen sportsman having competed as a decathlete and he currently enjoys running and tennis. Dan has also been a keen scuba diver having dived some amazing sites in Hawaii and Australia!