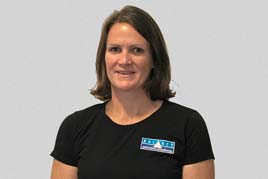 Caroline trained at Bristol University and qualified in 1993 with a BSc hons in physiotherapy. Initially Caroline started work at St George’s hospital, specialising in musculoskeletal physiotherapy, and subsequently in 2004 became a clinical specialist/extended scope practitioner which involves working alongside orthopaedic and rheumatology consultants, diagnosing and treating complex conditions. This involved requesting investigations such as MRI scans, x-rays and blood tests where appropriate .

Caroline left her NHS practice after 23 years to concentrate on her work in the private sector treating musculoskeletal conditions and teaching reformer Pilates.

Alongside her NHS career Caroline has also worked in private practice for 15 years, including a 6 year spell with Rosslyn Park Rugby Club, and a trip to the 1998 World Speed Skating Championships in Hungary with the British Team and more recently Team physiotherapist on the England U11and U13 Lambs tour to Dublin in 2014 and 2015.

Caroline enjoys using her acupuncture and manipulation skills alongside a manual therapy and exercise/Pilates based approach to treatment in order to restore function and aid return to sport. Away from the clinic, Caroline is a keen sportswoman and member of Wimbledon Windmilers having completed the London marathon in 3 h 47 m in 2004, and continues to compete in half marathons, achieving a recent PB of 1h 39m. She is also a keen cyclist.